COVID-19 Information About
Our Latest News
All News

Üsküdar University representing Turkey in the Brain Initiative Project which was launched in 2013 by the U.S.A. President Barack Obama attended the 5th Brain Mapping Day meeting held in the US Congress. Dean of Üsküdar University Faculty of Engineering and Natural Sciences Prof. Selahattin Gültekin gave information about the brain studies in Turkey at the meeting held on April 20, 2016. He stated: “We had the pride of representing our country in a meeting in which the World's leading scientists and politicians attended. In the coming period, we want to make presentations on the brain in the Turkish Parliament as well and we want to start this process as Üsküdar University”.

In the meeting, Üsküdar University was represented by the Dean of the Faculty of Engineering and Natural Sciences Prof. Selahattin Gültekin. Prof. Gültekin said that the meeting was very successful, and continued: “To take part in such a meeting was very important for our country. Very important work is being performed in the context of the Brain Initiative Project launched by President Barack Obama in the United States. Of course, a certain amount of money needs to be allocated for these studies, and research. President Obama allocated $ 100 million. Political support for research is crucial.

Therefore, such meetings are important to ensure this support. We, together with our Rector Prof. Nevzat Tarhan, board member of the Society for Brain Mapping and Therapeutics, want to go to Turkish Parliament, and explain the studies performed in the field of the brain to our members of parliament. In the coming period, we will give information to our politicians and request their support for these studies. Also, we want to organize “Brain Mapping Day” annually at the Turkish Parliament as performed in the United States Congress.

In the meeting at the United States Congress, the moderator was  the president of the Society for Brain Mapping and Therapeutics Babak, Congressman Andy Harris was given the award for his contribution to studies of the brain. 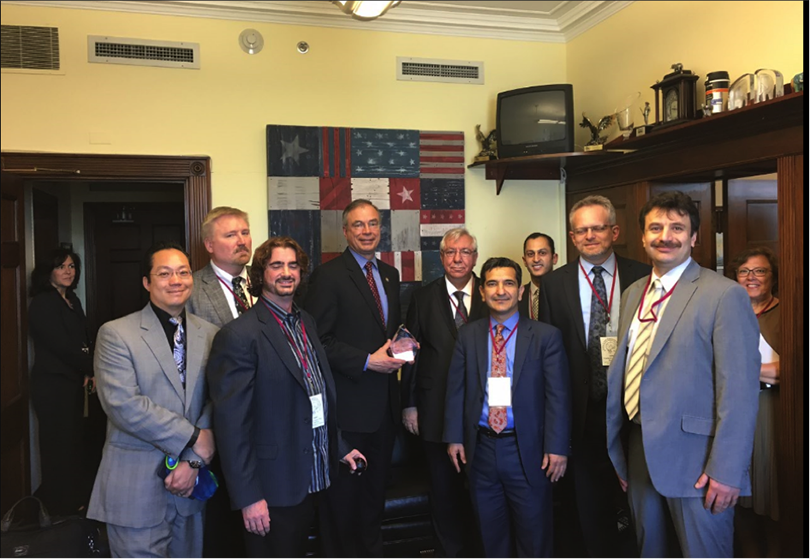 In the meeting, topics such as the role of the G20 countries in studies of the brain, brain cancer, artificial intelligence, neuro-nanotechnology, brain mapping and psychiatric disorders, the double hand transplant in injured soldiers, brain policies were discussed.